Fall Report: Metro-area Price Appreciation, Sales Continue to Taper Off.  Metro-area real estate showed more signs of a taper in prices and activity in September.  The downward trend in market activity has persisted into its third month, but numbers continue to be strong for the year overall.  Read past the RMLS’ reporting numbers to get our take on the trend. 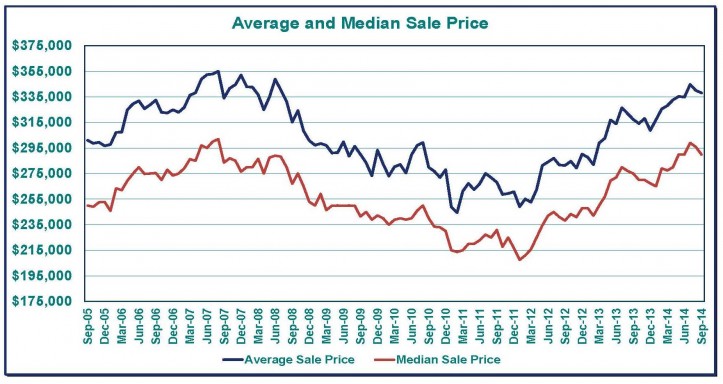 Winds of Change: Rising Inventories May Signal A Shift in the Weather.  For the past 24 months home prices have been pushed by persistent low inventories and a stable, low interest rate climate.   Starting in July though inventories of homes started a slow but steady rise (see chart).  Rising inventories will take some of the competitive heat off the market and should contribute further to the cooling trend in house prices.  Don’t expect that the housing inventory will grow in leaps and bounds however.  New home construction is not moving ahead quickly enough to meet demand – and it will not do so for several years.  And in spite of rising home sales prices, home owners have been reluctant to bring more homes to market.  Many are still underwater on their mortgage or barely have enough equity in their home to sell without losing money.  And others are unlikely to sell because they’ve taken advantage of low interest rates and have recently refinanced.

Geopolitical Instability, a Weakening Global Economic Recover, and Health Fears Push Interest Rates Down.   Recent worries about the situation in the Middle East, the chill on the global economic recovery, and unallied fears about the ebola epidemic have had an unintended favorable consequence: at the time of this writing the benchmark 30-year fixed rate conventional loan, testing the under-four-percent mark, is the lowest it has been in 16 months.   There’s widespread belief though that once the economic recovery regains its stride we’ll see lessening federal influence over rates in the months ahead of us.  And that will set the stage for a long-anticipated rise in mortgage rates.

In the meanwhile, the cooling trend is welcome news to home buyers frustrated by rising prices and bloody bidding wars.  And the trend should combat fears that we’re building into another worrisome real estate bubble.  In the long view, look ahead to the coming months as a repeat of the Same Old Story:  for years we’ve suffered a Catch-22 recovery that delivers low interest rates and a favorable housing outlook when job growth and wages are stagnant, and higher interest rates and housing unaffordability when jobs and wages are on the upswing.   It’s these writers’ opinion that our see-saw recovery will persist at least another two or three years.  Hang on for the ride; we’ll be right here alongside you!