In the News:  On June 10th, The Oregonian reported that Portland’s Bureau of Planning and Sustainability (BPS) is preparing a set of regulations to govern infill development to meet the city’s needs for more housing in the face of its recent rapid growth.   The proposal seeks to:

An on-line survey of around 7,000 participants conducted by the BPS this past winter revealed that the public’s greatest concerns are housing affordability; demolition of existing viable homes and the consequential loss of neighborhood character and history; parking and congestion; and loss of tree canopy.

While the proposal to adopt more “middle housing” alternatives in Portland’s single-family residential zones may not wholly allay all the public’s concerns, we endorse a course change to Portland’s housing regulations.

Want a Bird’s-Eye View of How Portland is Growing?  Coolest web site ever!  Click on http://www.nextportland.com/ for an interactive aerial map of Portland – zoom into your neighborhood! – and keep tabs on all the growth that’s happening here.  “Next Portland” covers all “multi-family residential, retail, cultural buildings, educational buildings, hotels and other large projects happening in the City of Portland. [They] cover both new buildings and major alterations or additions to old buildings. [Their] blog posts are exclusively written about projects that are either still in the design phase, or are under construction.”   Take a look!  Do you want to know more about the construction at NE 7th, between Russell and Knott?  That’s going to be a 6-story, 68-unit apartment building.  And that’s a 4-story, 40-apartment complex going in at 2330 NW Raleigh, in case you were wondering.   We find ourselves referencing information off this site two or three times a week – it’s a terrific way to stay informed about growth and development in the city.  Check it out!

Seeing a Slowdown?  The current seller’s market kicked off in January 2013, which was 42 months ago.  The chart looks impressive: 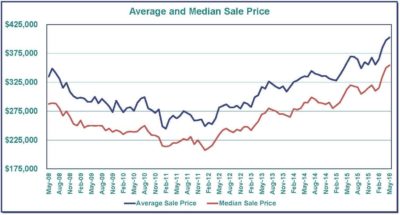 In those 42 months the average price of home in the Metro area has risen 28%, from $287,700 back in January 2013 to $402,500 at the end of the May 2016 reporting period.  While sales remain robust, we’re seeing a decrease in the numbers of participants in bidding wars and even a slight increase in inventories in certain market segments (among more expensive, $600,000-plus homes; in outlying suburbs).  With school getting out and summer vacations cropping up in the calendar, June sales often soften, certainly, but a three-and-a-half-year old market is getting a little long in the tooth. . .  and there’s the fall election and attendant uncertainty surrounding it just ahead.  Going into the summer market we’ll simply note there’s a faint warning light on the dashboard, and leave it at that.   We remain unveeringly, cheerily optimistic about the health of the market in the long run.